Censorship of Art at a Midwest County Fair 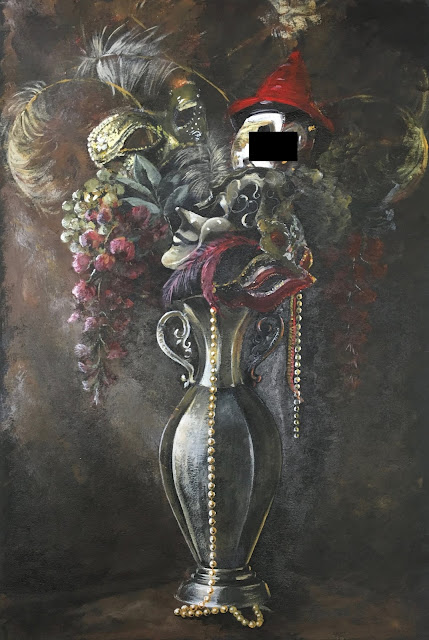 I have stood in front of Michelangelo's David, unable to take my eyes off of his . . . well . . . you know. I mean, it was right there - at eye level. I was not offended. I knew, before I came into the room, that David was naked.
I have a portfolio from college full of nude drawings. I am not offended by myself. In fact, my children at very young ages saw the pictures of naked people that Mommy drew. I'm pretty sure they were not offended.
It is my opinion that the human body is just that - a human body - beautiful and expressive. There is no better way to learn how to draw humans than to draw them unclothed. It is important to see the skeletal form and musculature to understand how it all works.
I support artists who want to exhibit their nudes in local art shows. There are plenty in our surrounding area throughout the year that accept works of art containing the nude form.
Having said all that, here's where I stand (for now) on our county fair. (Deep breath). I would like it to remain a safe zone. Parents eating cotton-candy and navigating strollers through the crowd should not have to worry about covering their children's eyes. Again, I would not cover up the eyes of my own children. (They are all grown and would absolutely not allow that anyway.) Can't we, however, respect the feelings of families who do not feel like I do? Can't the county fair remain friendly to all families?
There's also the issue of the slippery slope. Let's say some side-boob makes it into the exhibit this year. Next year the same, or maybe a different artist comes in to display butt-cheek or nipple. Before you know it (and although unlikely (?) this could happen), the people who pushed for nudity that they considered tasteful, are being offended by a more sexual content. Where does the line get drawn? Who draws it? Does that person face threats and public persecution?
I've weighed in. I'm not the queen of the world (in case you were thinking I might be). I could be wrong and this is an issue open to debate, voting, etc. Change of procedure and change of opinion can be a good thing.
I would just recommend that people attack the issue and not each other.
The piece above is a work in progress study, in acrylic on illustration board, for a larger oil painting I want to do. I covered up the mask of Pinocchio because . . . you've probably heard the nose jokes.
Posted by Tracy Onoz at 7:04 AM No comments: 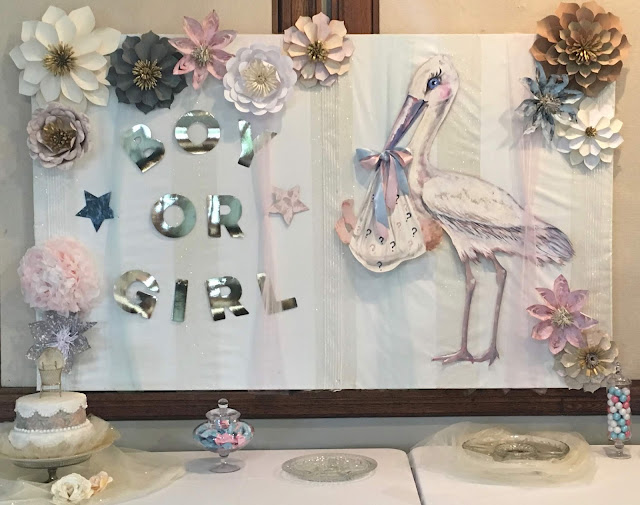 Here is what the final board looked like for the gender reveal party, and
there were plenty of flowers left over to put out for the centerpieces on the tables.

A peek into the decorations department last week: 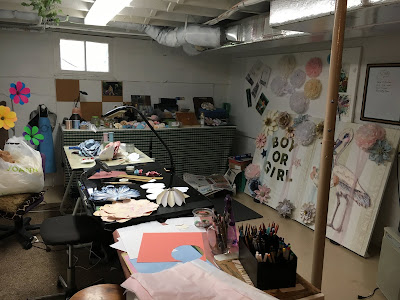 And a look at the studio after a few hours of clean-up on Sunday: 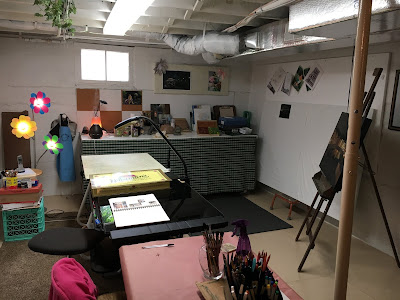 Here's where a lot of the flowers ended up. I've never been so happy in my studio before.
It's beautiful down here. : ) 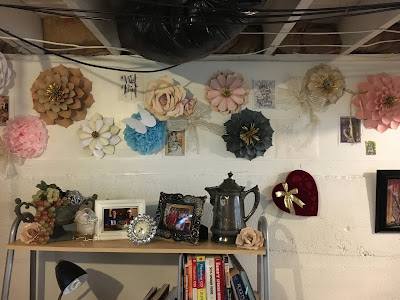 I promised last week to share links to some of the tutorials I used. The roses were super easy.
Here is a sample of mine. (I applied glitter glue to the petals)
Here is the link to the rose making tutorial https://www.youtube.com/watch?v=SCdgIxWfvaQ 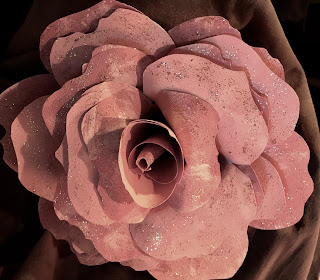 And the magical moment we all waited for:
We're expecting a . . . 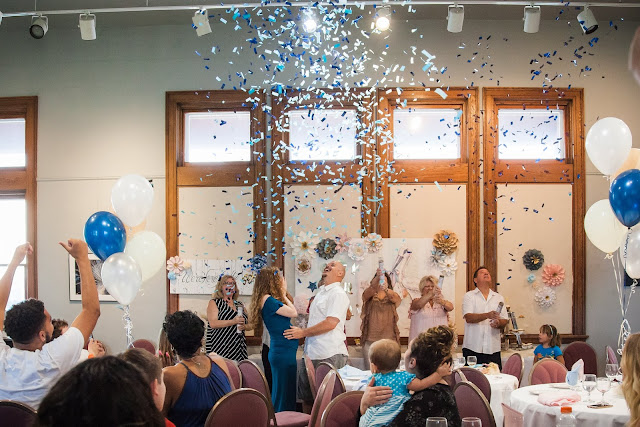 Posted by Tracy Onoz at 4:18 AM No comments: 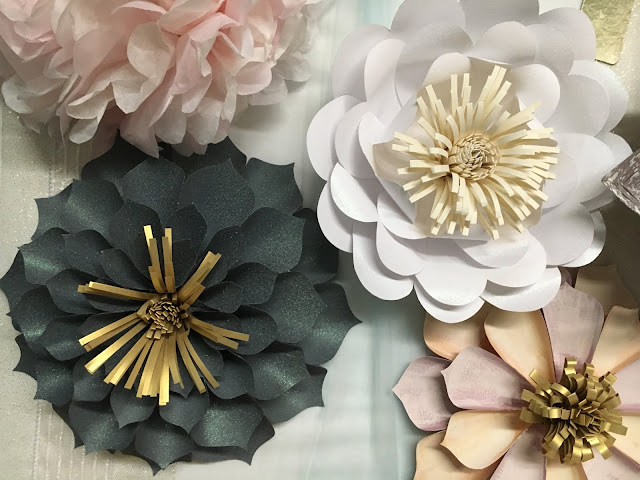 My life has taken a very sudden (but temporary) turn into the paper flower making business. Well, not a business, more of a labor of love. My step-daughter's gender reveal party is coming up and I have been making paper flowers - many, many paper flowers. All of them have been done by following online tutorials. Next week I will share some of the links and will also be able to show more photos of how it all came together (not to mention - the answer to the HUGE question - am I expecting a granddaughter or a grandson?)
Below are the first two types of flowers I tried out. 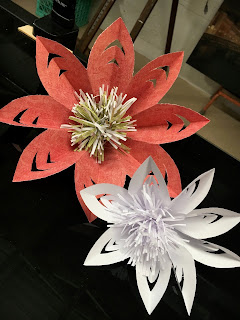 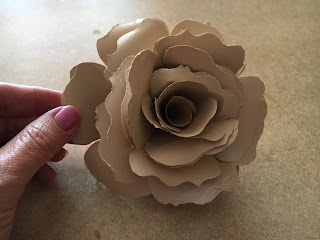 I am having sooooooo much fun being a crafty girl!

Posted by Tracy Onoz at 4:33 AM No comments: 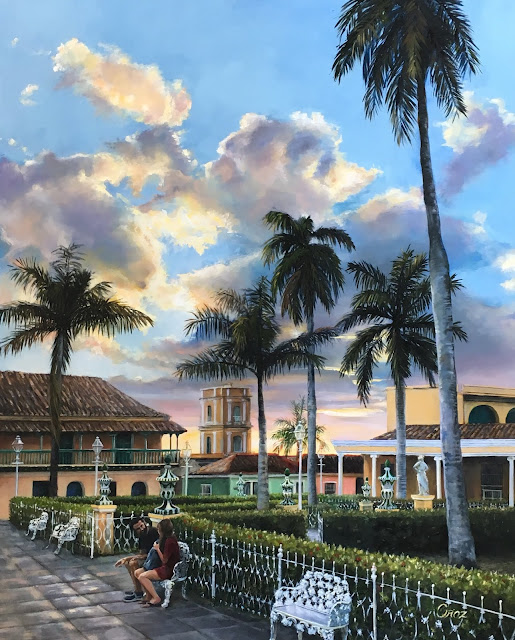 I started this painting over a year ago when I returned home from our big family trip (nine of us) to Cuba. When we visit Cuba it's to spend time with my husband's family, so since I only stay for a week, I stick close to them. This last time however, the nine of us, with my grandson along as well, piled into a too small van, and headed to the beautiful city of Trinidad for an overnight stay.
To make a reasonable income, many Cubans have fixed up their homes as bed and breakfasts. I highly recommend staying in one of these homes! You get more of the feel of the cuban culture and they bend over backwards to make your stay comfortable. The breakfast we were served on the upstairs balcony (remember, this is their modest home) was absolutely delicious! Abundant with fresh items and homemade care. Do not hesitate to stop where you see a sign hanging at someone's home advertising a meal or a place to lay your head for the night! Not only does it help the cuban people but the food is 100% better and the people are so appreciative. I read something once that said people traveling to Cuba should be prepared for bland food. That's for the people eating in hotels and fancy restaurants. Homemade cuban food is delicious!
Sad fact: Many Cuban people have no idea how beautiful their own country is. Cubans themselves do not often make enough money for vacations and day trips, and up until very recently they weren't even allowed into many places like hotels, resorts, and restaurants.
My husband, step-daughter and son-in-law stayed in Cuba for a second week and were able to take a few Cuban family members to some more of these beautiful places that they would never have had the opportunity to see.
Below are three photos from our trip to the beach with as many family members as were able to come. We rented a truck and let me tell you, not only was the beach beautiful and fun, but that trip bouncing along in the truck with the tropical air messing up our hair and the cuban songs being sung and the joy of being on a trip like that together . . . unforgettable. 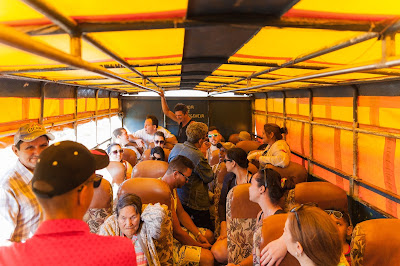 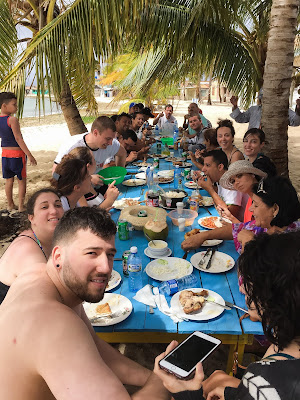 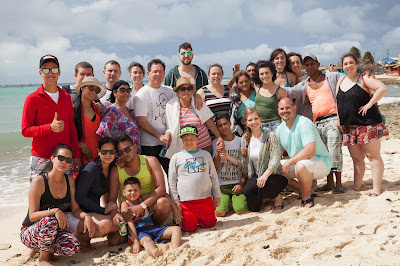 Posted by Tracy Onoz at 6:09 AM No comments: 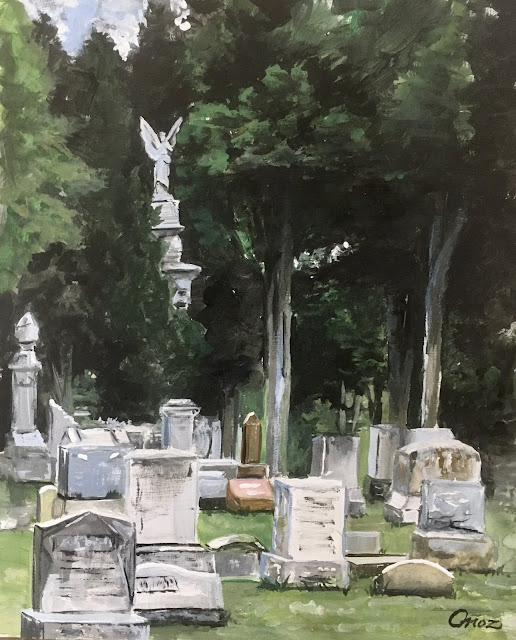 I went to the Greenville Cemetery last week with my art student. It was an overcast day - a quiet place to sit and sketch. Afterward, we walked around a bit admiring the statues and reading the tombstones. A cemetery can center me like no other place. It reminds me to go enjoy my day and live my best life while I'm still here.
The above piece is from a photo I took while we were on our way out. A few storms clouds were moving in and when I looked back over my shoulder I saw this composition. I loved the angel looking over the people at rest, ready to protect them from the elements. 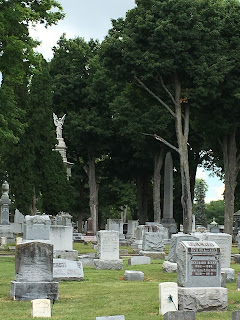 I painted it in a re-purposed book. I coated the page in a layer of gesso (primer), and when that dried I applied the acrylic paints. I always feel I do my best work on less precious surfaces with the most inexpensive materials. Go figure. 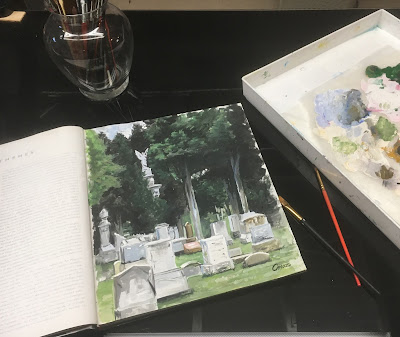 Posted by Tracy Onoz at 5:25 AM No comments: