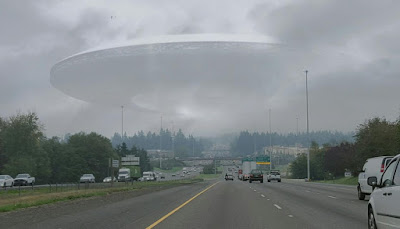 This is a cool, digitally altered photo I found online to go with the following bit of very short flash fiction I recently wrote (below) for a prompt shared with my writing group.


They hold hands, staring at the ceiling as sweat evaporates from their bodies. They’ve been married 27 years and have never made love with such ferocity, nor at the same time, with so much tenderness that both of them had cried.
At last she speaks. “What have you heard?”
He answers as though in a trance. “Everything is in chaos.”
“But, what did you hear?”
He turns on his side to face her.
“I saw the president speak. He gave a prayer.”
“I saw that too! I nearly came unglued when he cried.”
“What?! He cried?”
“Right after his prayer.”
“I didn’t get that far. Several of us at the office were hovering around one computer. I was crowded out, but I’d seen and heard enough. I just wanted to get home to you.” He brushes her hair out of her eyes and pulls her closer. “Have you spoken to the kids?”
She shakes her head. “Everything went off after the speech. There’s no television, no phone, no internet.” She shudders and her breath accelerates. She’s falling apart and nothing can stop it from happening.
“I can’t reach my babies!” she wails.
“Shhhhh.” Her husband holds her, rocks her, tries to maintain his own sanity for both their sakes.
She eventually rolls away from him and reaches for an old tissue on the nightstand. “What do you think they want?”
“I’ve no idea, my love.”
He moves until he’s behind her. He wraps his arms around her middle, her back to his chest, her warmth against a terrible coldness closing in on him. Two people alone in a world of seven billion people, who are also alone.


I read this to my group last week and as I neared the end I heard my friend Brenda catch her breath. As he "moved behind her" she thought he was going to wrap his multiple arms around her!!!  Haha! That would have been a great way to end it!

Posted by Tracy Onoz at 1:53 PM No comments: