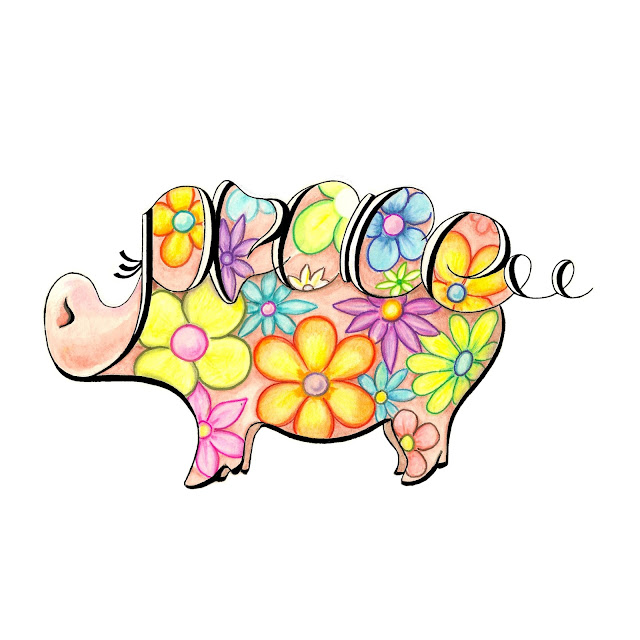 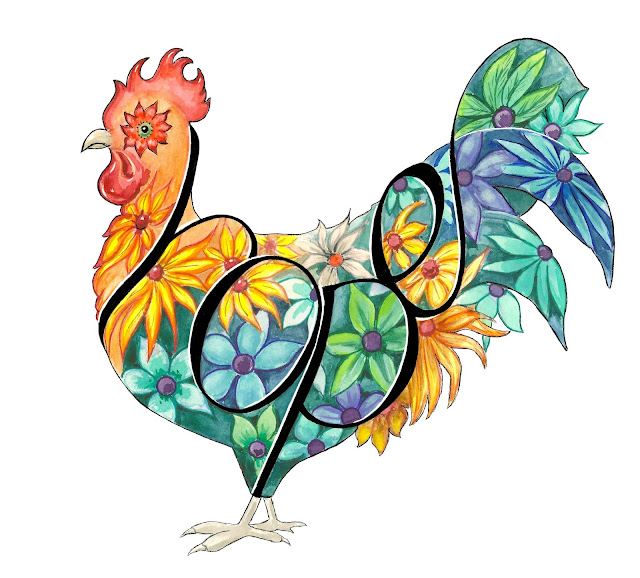 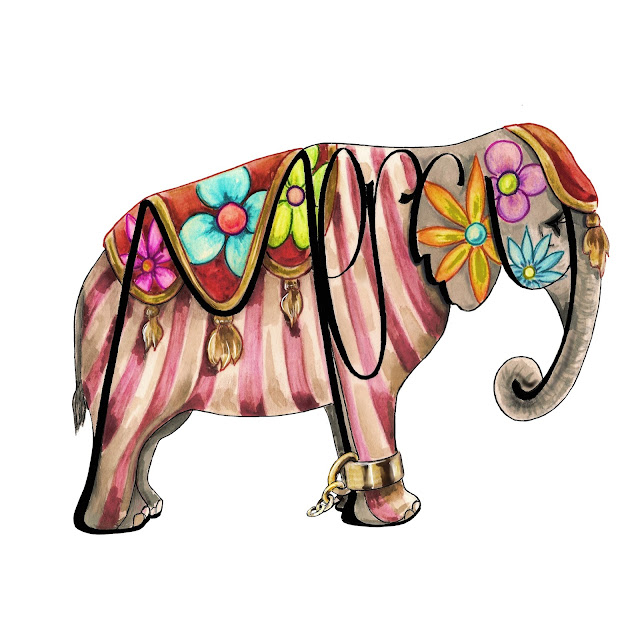 These are three pieces from a small series I'm working on for my Society6 shop. There will probably be two or three more to come in later posts.
"In a gentle way, you can shake the world." - Mohandas Ghandi

Here's a link to my current shop - https://society6.com/tracyonoz
Posted by Tracy Onoz at 5:43 AM No comments:

I Am a Badass 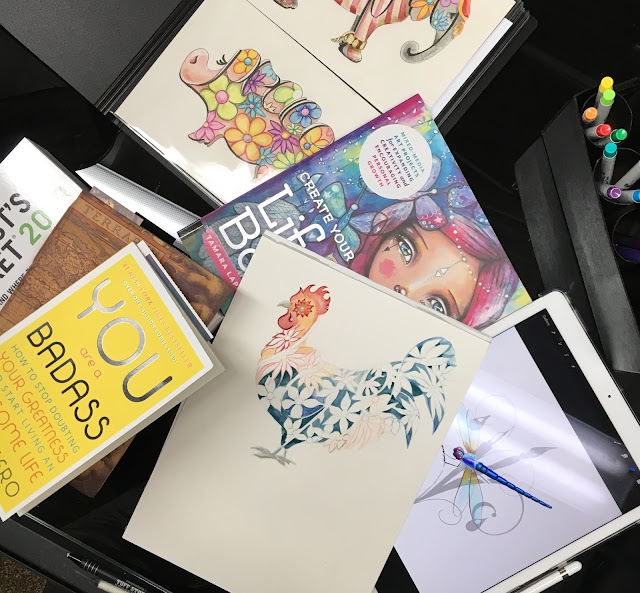 I just received an amazing gift - "You Are a Badass" by Jen Sincero https://jensincero.com/shop/
Along with it, I received a journal to write down my revelations as I discover exactly how much of a badass I am! I cannot recommend the book enough to anyone who wants to create their own unique life and do everything they can to reach their potential. I'm only at Chapter 8 and it has made a big difference.
One of the major things I will be making happen within the next couple of months, is setting up a new website. The new one will invite you all in, not only see my work but actually be able to purchase some of it! I am currently working on a logo (note the dragonfly peaking out on the right), and a few designs to sell on Society6 (prints, coffee cups, t-shirts, etc). I also hope to be able to offer, for sale, some of my original oil paintings.
In the meantime, I will keep sharing my work here. See you next Wednesday!
Posted by Tracy Onoz at 4:31 AM No comments: 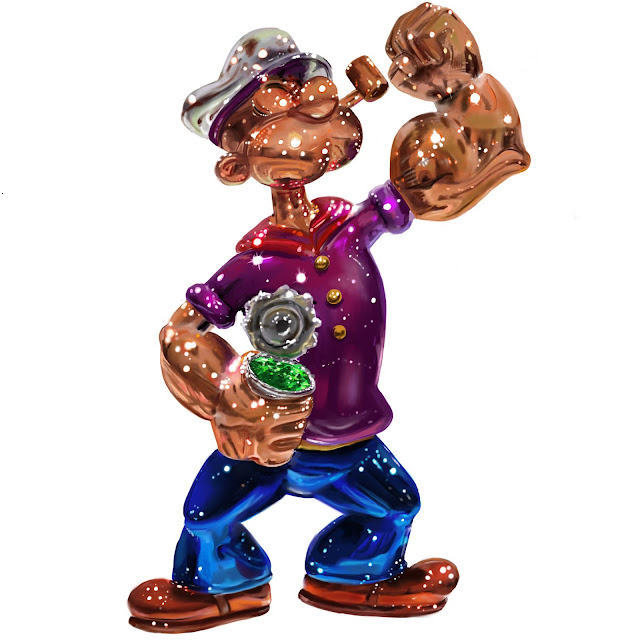 This is a couple of days late because I was on vacation visiting a couple of our kids in Vegas. (Awesome time with them as always). My husband and I spent one day strolling through the casinos and stumbled across this guy at the Wynn. A $28 million dollar sculpture of mirror polished stainless steel by Jeff Koons. I took a photo and worked from that to do what you see above on my iPad in the Procreate app. If anyone would care to send ME $28 million I'd be happy to send you a print! :)
Posted by Tracy Onoz at 12:07 PM No comments:

A is for Absinthe 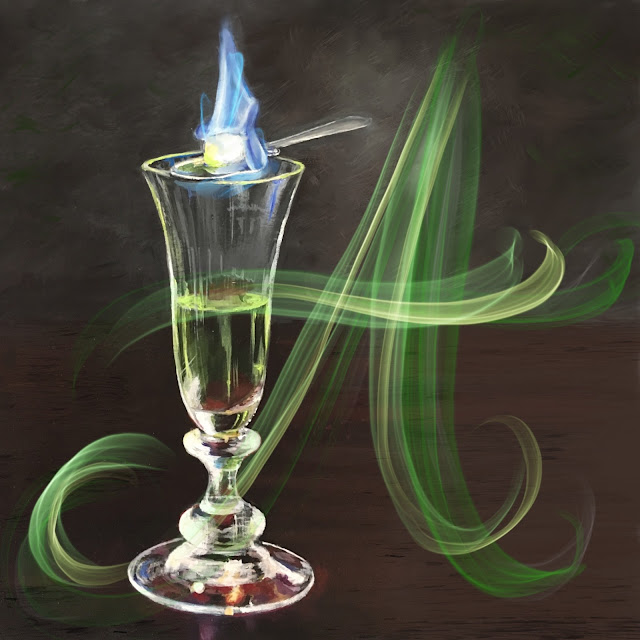 Absinthe: the drink of bohemians.
I've always had a fascination with Absinthe. In the mid 90s I saw an episode of Highlander (remember the catchphrase: "in the end there can be only one") where Duncan MacLeod is sipping a glass of it. The drink immediately went on my mental bucket list. It was beautiful and eerie, and for crying out loud, the Highlander drank it!
The beverage was illegal in this country from 1912 to 2007, so at the time my fascination began, I assumed I was going to have to travel out of the country to give it a try.
It's often called The Green Fairy or The Green Goddess and was said to have hallucinogenic properties. I want to make clear that I've never experimented with, nor wanted to experiment with, hallucinogenic drugs, so why the attraction to Absinthe?
Absinthe was a drink favored by many artists and authors: Van Gogh, Toulouse-Latrec, Gaugin, Hemmingway, Oscar Wilde. Was there magic in the bottle?  Did Absinthe evoke visions that made their creations so much more revered? The drink took on mystical proportions in my mind.
Then, two years ago, I saw a show in Las Vegas called . . . you can probably guess - "Absinthe." Not only was it the show's title, but guess what was being served! You probably guessed again. Absinthe! I ordered a drink called a Green Fairy! I was, truthfully, very scared. Here it was in my hand. I was afraid to take the first sip.
The show was set up in a circus-like tent with a small stage in the middle. I was afraid I would pass into a semiconscious state and miss the show. I was then afraid maybe there was no show. Maybe everyone sat in a large circle and hallucinated one.
Below is a photo of me with not only my Green Fairy in one hand, but someone else's absinthe drink in the other (probably my step-daughter who was photographing this momentous occasion for me). 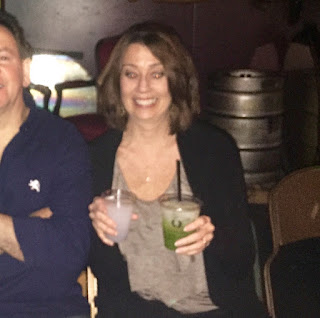 I sipped very slowly and remember the show quite well. (Or at least I think I do). It was fantastic! But, because this absinthe drink was served in a plastic cup, after the show we went in search of a more authentic absinthe experience. It led to a couple of other nice, dark and cozy pubs, but no one had this thing: 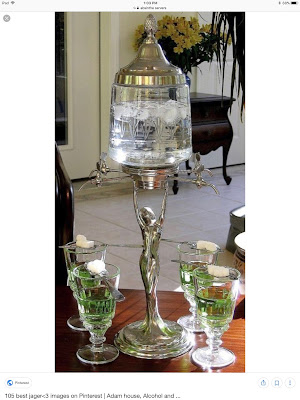 This is an image I found online. A beautiful container that drips water over a sugar cube and into a glass of the beautiful green liquid causing it to turn cloudy. Right there is a magical experience in itself.
In the 90s it began being served with an alcohol-soaked sugar cube on fire (I admit it looks pretty in my painting above), and that was how my second-ever shot of absinthe was served.
I did a little reading on the subject before I wrote this and read that absinthe has no more hallucinogenic properties than other alcoholic beverages. It is simply a strong drink (tasting of anise) and people tend to drink too much of it. (Not me. I was so nervous I would hallucinate I only had two drinks over a period of 5 hours).
As for the artistic inspiration: the evening, the show, and the pubs afterward did end up sparking an idea for a short story that I am currently working on. Who knows, maybe someday that story will be famous and they can lump my name in beside Van Gogh and Hemmingway as another of the artists inspired by the Green Fairy.

Nothing will make you feel better except . . . 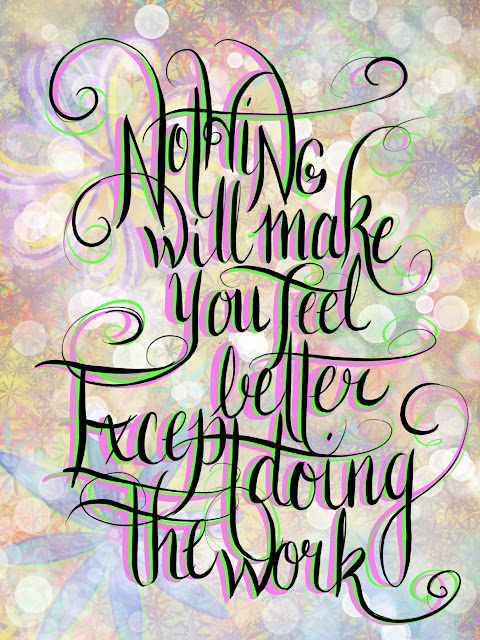 First, Welcome back to my Wednesday blog!
Second, I like collecting quotes and these little words of inspiration (done in Procreate) are ones that pack a big wallop for me. I am trying to keep them at the front of my mind for the new year. I have this little piece printed out and hanging over my computer.

Third, one of the things on my goal list for 2018 is to write more. And who better to share those writings with than you? The following is a short bit for a writing prompt: What I remember about my first trip to the hospital:

PineSol and Ipecac
The morning had started nicely enough. I was probably four years old. I woke up before my parents and did whatever it is that four-year-olds do in the bathroom, in the morning, by themselves. The highlight of my daily, morning routine was the consumption of a Flintstone vitamin. This particular morning, my mom, the usual administrator, was still in bed and I was apparently feeling like a big girl. Admiring my big-girl self in the mirror, I popped one in, (let’s say it was a green Flintmobile), and watched in delight as my tongue turned green. WOWZA! I popped another one in, (most likely a purple Wilma). This was fun!
I have no recollection of how many shades of color I explored before there came a knock at my kitchen door. My friend Patty had come over to play.
“Come in here, Patty! You’ve got to see this!”
In no time, we polished off the entire Flintstone cast, and went outside to do whatever it is four-year-olds do in the backyard, in the morning, with no parental supervision.
Before long my mother came tearing out the back door.
“Tracy!” (I can still hear the panic in her voice.) “Did you eat all of these vitamins?!”
Well, actually I had help, but I was socially developed enough to understand that a person didn’t rat out their friend.
I was immediately whisked off to the emergency room where I sat waiting to regurgitate vitamins that would have most likely just made me extra healthy, and learning to hate the smell of PineSol.
If you’re wondering about Patty, I haven’t seen her for years. I hear she became a superhero. 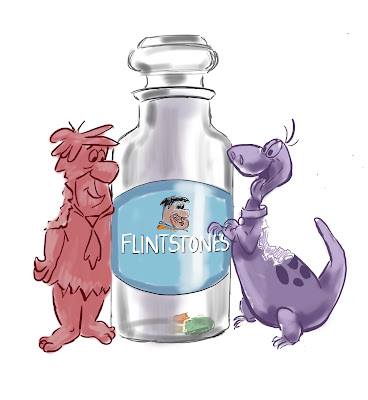 Here's a quickie bonus illustration. I googled Flintstone vitamins 1970 (there, now you know I was alive and four in 1970) and this is the bottle I would have emptied.

Posted by Tracy Onoz at 5:03 AM No comments: