Dr. Dolittle and the Horse 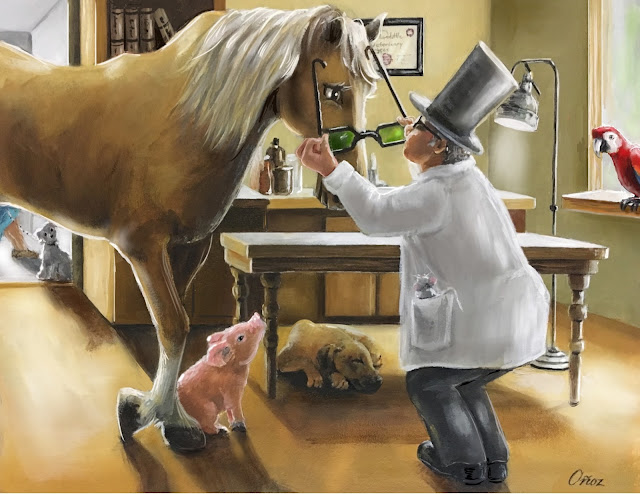 This piece is for a notecard contest for the SCBWI of Central/Southern Ohio.

In this scene, Dr. Dolittle's parrot, Polynesia, has already taught him how to speak to animals and this horse was able to explain that he simply needed glasses. It is done in oils but I went in afterwards (side note: afterward and afterwards are both correct as far as Webster dictionary is concerned, in case you wondered about that, which I did) and made a few adjustments digitally. I made the dog a little bigger, the parrot a little smaller, added the light beam pouring out of the lamp, and a few other minor, nit-picky things 'cause that's how I am - nit-picky.

I have to share a moment of shock I experienced as I was reading "The Story of Dr. Dolittle." There is a scene where the doctor and several of his animal companions are crossing the ocean to Africa where a terrible illness has befallen the monkeys living there. One of his companions, Dub-Dub the duck to be exact, dives into the water, behind the ship, in search of herrings for food so that there BEEF supply will last longer. WHAT!?!? Does Dr. Dolittle eat animals he can talk to?!?! I am a vegan, so, of course these words are going to jump out at me and freak me out. I just wonder what the rest of the population thinks.

And then there's Prince Bumpo - an African prince who wishes he was white to gain the affections of Sleeping Beauty. What!?!? I'm imagining this book would not make it to print in this century .(Thank goodness). To the doctor's credit, he felt that Prince Bumpo looked fine just the way he was, but . . . wow.

The Dr. Dolittle I've painted is a vegetarian. He loves and respects all animals and people and doesn't eat or bother any of them.